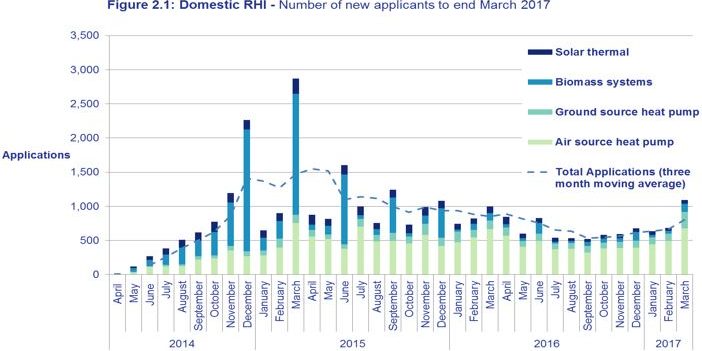 The March 2017 monthly statistics for the Renewable Heat Incentive (RHI) programme have been published and make interesting reading if you are interested in renewables.

There have been 58,875 applications for the domestic scheme since it launched in April, 2014. Of these applications 99% were accredited for payment on the scheme, that means that 3,904 RHI applications were rejected and won’t get the RHI income they thought they would.

48% of all applications are for Air Source Heat Pumps (ASHPs), this is good news considering the early rush for Biomass due to the high tariff and suppliers targeting this sector of the market.

Patterns of deployment differ across geographical regions – for example, one third of applications in Scotland are biomass (compared with an average of 20% in other regions). Over half of all applications in London are Solar Thermal (compared with an average of just 15% – in other regions).  Ground Source Heat Pumps (GSHPs) do not show radical deployment differences between geographic regions.

A new addition to the statistics is installation costs by technology and capacity. As you would expect, the general trend is that as the capacity increases, the cost per kW decreases but there are some anomalies.

We are site auditors for the RHI scheme and can be contacted for further information.