Energy Efficiency Champion of the Year 2017 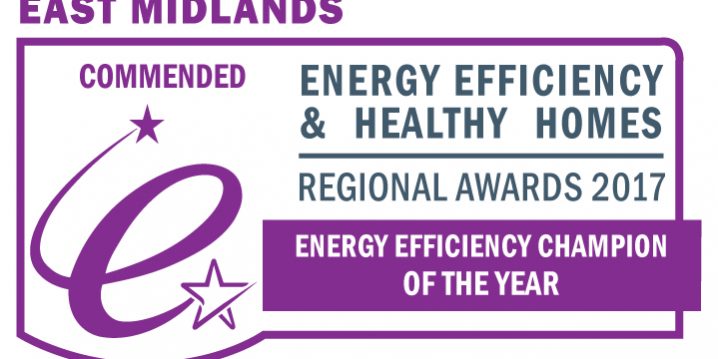 We’ve only gone and got another award for the East Midlands Energy Efficiency Champion of the Year 2017, after our previous two wins it was “commended”.

Details of the awards can be found here .

So why do we keep winning? What is it that we do differently and can you learn something from it?

My passion is helping householders make their homes warmer and cheaper to heat.  This doesn’t happen on it’s own, you have to steer government policy and support industry to implement this.  Here’s a little of my story:-

Carl trained as a Home Inspector and Domestic Energy Assessor in 2006 and was accredited to produce the surveys for the Home Information Pack before their requirement was removed.  He contacted the Department of Communities and Local Government (DCLG) to discuss the future of the Energy Performance Certificate (EPC) and within 6 weeks had a seat on the Energy Performance and Buildings Directive (EPBD) Forum.

Carl was instrumental in the development of the Green Deal at policy level and set up a Green Deal Provider and a Green Deal Advice Organisation to support independent assessors and installers.

Green Deal Advisor Association (GDAA) was 2 of the first 6 GDOA’s listed on 1st October 2012 and now has over 450 independent GDA’s on its certificate.  Carl represented the GDAA on the GD-ORB Assessor Forum and is regularly invited to assist with policy review and development.

The GDAA is constantly developing new opportunities for its members supports them in delivering large projects that they may not of been able to get involved with on their own.

The GDAA has been undertaking all domestic RHI audits for Ofgem, not only has this secured valuable work for 20 GDA’s but it allows us to influence future policy.  It breaks my heart to see householders that have been mis-sold renewables, I am working with Ofgem to develop support mechanisms. I have been shocked at how many social tenants are operating their renewable systems in ways that are not efficient, am also working with social housing providers to develop national standards and support mechanisms.

Carl set up a Green Deal Provider and it was one of the first to delivery ECO, the company has now delivered significant volumes of HHCRO and CERO.  When I left the GDP last year I helped several other companies through the application process and provided training to installers that wanted to deliver ECO but didn’t understand how it worked and didn’t have any systems in place to be able to deliver it.

Carl established a scheme for independent installers to be able to work on the original Green Deal Cashback scheme and helped Local Authorities, Housing Associations and independent installer’s process GDHIF applications.  Over 600 applications were made and redeemed. The quality systems used were praised by the scheme administrator during a recent audit.

Carl was approached by the management committee of a block of 98 flats to see if he could help their private residents get some funding for External Wall Insulation as they had been trying for over 10 years unsuccessfully.  The EWI has now been completed and Carl managed the entire project.  One elderly resident had been housebound for over 10 years and had to have her heating on full time, now she can switch it off some of the time.  Over a cup of tea and a chat I showed her how to play her VHS videos, no one had taken the time to show her how before.

With Brexit comes the opportunity of influencing policy for the next few years.  Carl has been asked to sit on one of the government working parties and is developing the first new accreditation scheme for energy assessors since the introduction of EPBD. The scheme will focus on the requirements of the assessors and will include them within the running of the company.

Carl has identified several major flaws within both assessment methodology and policy and is working to have these addressed.

All this is being done whilst bringing up a family and supporting a long term ill spouse.

Thank you for taking the time to read my nomination statement.